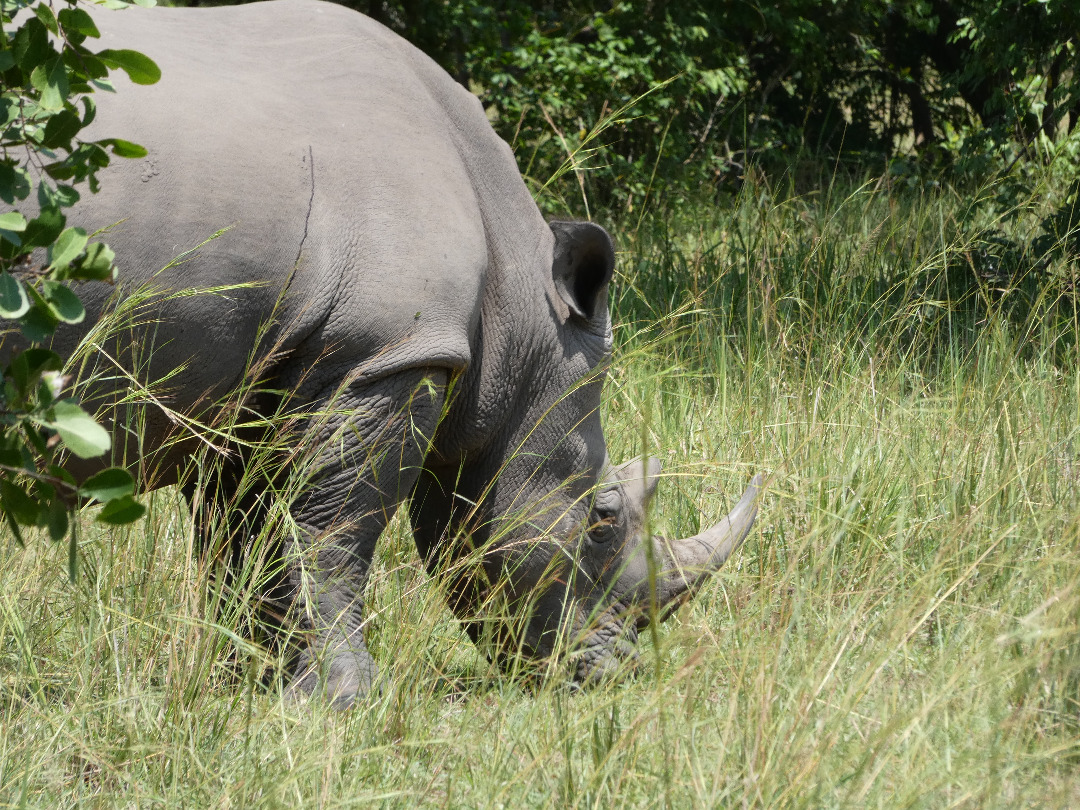 Have a look at the 5 top reasons to visit ziwa rhino sanctuary. Did you know that in the whole of East Africa, it is only in Uganda where you can track rhinos on foot? At the time of writing, the sanctuary is home to 33 southern white rhinos.
Tourists increasingly go to the sanctuary for activities like rhino trekking, shoebill trekking, canoe rides, bird watching, night walks, nature walks, and relaxation.

At Ziwa Rhino Sanctuary, the travelers can decide to go for rhino trekking and view threatened white rhinoceros in its natural habitat. You will be piloted by an armed rangers who will escort you to the rhinos, you can as well take enough photos during trekking.

The only wild rhinos in Uganda are proudly housed in Ziwa Rhino and Wildlife Ranch, which is situated in the Nakasongola area.
The Uganda Wildlife Authority and the Rhino Fund Uganda collaborated on the rhino reintroduction effort.
The ziwa rhino sanctuary is ideally situated on the Gulu route towards Murchison Falls, 176 kilometers (100 miles) north of Kampala (branch off at Nakitoma Trading centre).

Ziwa Rhino Sanctuary is 7000 hectares of woodlands and savannah has come up with land for rhinos and over 78 park rangers and also security guards who keep 24 hours to ensure that rhinos are secure. The 70km is surrounded by electric fence which is 2m so as to keep the rhinos in.

Ziwa Ranch, a cattle farm that imported exotic cattle into Uganda, was founded in 1983. Captian Roy and his family held the property outright.

After extensive deliberations with Yvonne Verkakik, the executive director of the Rhino Fund, in 2002, it was decided to move 7,000 heads of cattle to another area in order to create a rhino sanctuary.
Rhinos became extinct in Uganda as a result of poaching and illegal actions,

For the sake of the species’ survival and ongoing conservation, the concept of reintroducing rhinos into the nation sounded sensible.

Initiatives like the M2M Das Challenge and naming the Rhinos helped raise money for fencing, which was necessary to help protect the land from intruders and create enough security for the project to start in earnest in 2005. These fundraising efforts were made possible by the Roy family and friends of rhino rehabilitation.

To finally reintroduce southern white rhinos to their original habitat in the areas around Murchison Falls, Ziwa Rhino Sanctuary was created in 2005.

Since the project’s inception, six Southern white rhinos have multiplied to 33 and counting, proving its success.

The rhino population had increased to thirteen as of June 2013 from its original six animals, four of which were purchased from Solio Ranch in Kenya and two of which were donated by Disney’s Animal Kingdom in Orlando, Florida, in the United States.
The total rhino population at Ziwa Ranch increased to 15 after the birth of an additional calf in April 2014.
There were twenty-two rhinos at the refuge as of March 2018, and there will be 33 by December 2021.

The goal is to release these magnificent animals back into the wild so they can once again wander the plains and their natural habitats!
The goal of the initiative is to have these animals become a part of other national parks throughout Uganda, roaming the land with other wildlife species. It is a collaborative effort between the Uganda Wildlife Authority (the custodians of the species) and Ziwa Rhino and Wildlife Ranch Limited.

Ziwa Rhino sanctuary is a home to the only rhinos in Uganda and is one of the most wildlife conservation projects in Uganda.  The rhinos are the main attractions but the sanctuary has a sizable number of butterflies reptiles and mammals. Other animals within the fence include, crocodiles, leopards, hippos and bushbucks

Rhino tracking the major activity carried out and the visitors usually trek the Rhinos on foot. Once you reach near the rhinos with a car, the guides will take you on foot 7 meters close to the rhinos. You will enjoy these animals continuously feeding on fresh vegetation without bothering your presence.

The rhinos are the major attractions but the ziwa rhino sanctuary has a sizeable number  of butterflies, reptiles and mammals. Small primates found in the sanctuary are the common black monkeys.

As you move through the night with the knowledgeable guides prepare to encounter some of the sanctuary`s animals, birds and bats. A guided nights walk will allow you discover new sounds under beautiful moonlight in the Africa wilderness

Where To Sleep/Stay In Ziwa Rhino Sanctuary | Accommodation

When To Visit The Ziwa Rhino Sanctuary

The best time to visit Ziwa Rhino Sanctuary is during the dry season in Uganda which is around June to September and December to February when the sunshine is at its peak.

How To Get To The Ziwa Rhino Sanctuary

Do not forget about the Murchison Falls, the most powerful waterfalls in the whole world. The mighty Nile flows through the park, creating a powerful spectacle at Kabalega Falls.

You get to enjoy the views of these magnificent falls, where the Nile forces its way through a gorge in the rocks and tumbles 43m below into Lake Albert. Did you know that Murchison Falls is the MOST POWERFUL waterfalls on the planet?

By Road;
You can also travel by bus or private vehicles and in 4-6 hours you would be at the park.

Murchison Falls National Park is a dream come true for lovers of nature, peace, beauty and breath-taking sights. And visiting the park is our way of showing appreciation to mother nature. You are most welcome any day, any time.

Ziwa Rhino Sanctuary  has a tropical and hot climate.
Temperatures are fairly consistent throughout the year.
Daytime temperatures of around 31°C/88°F are common, with nighttime temperatures dropping to around 18°C/64°F.

The rainy season lasts from March to November, with a dry spell from June to July.
During the Dry season, there is little rain (December to February).

December to February is the dry season. It’s hot and dry

March to November is the rainy season

It doesn’t rain much during the Wet season, but heavy storms are possible.

Ziwa Rhino Sanctuary gives you a chance to experience the majesty of these creatures up close with a rhino trek, where an experienced ranger will lead you on foot to see them at a safe distance.

Where the magic happens is in Ziwa Rhino Sanctuary. We invite you to visit Uganda in our secluded sanctuary and look forward to giving you a thrilling vacation.