Have you known it before how interesting it would be visiting Mapungubwe National park in South Africa?. The National park is located Limpopo Province, south of the confluence Limpopo and Shashe rivers about 16km to the North East of Venetia Diamond Mine, the park borders Mapesu Private Game Reserve to the South.

The Park was established in 1995 and covers an area of over 28000 hectares and is one of the places in Africa that has meerkats and Nile crocodiles.

The park also protects the historical sites like the Mapungubwe hill which was the kingdom of Mapungubwe, as well as Wildlife, Riverine forests, savanna vegetation and the rivers. The park has 4 of the big five animals, bird species to mention but a few.

Honestly as soon as you enter the park, you are mostly welcomed by a large herd of elephants surrounding an even larger baobab tree. The elephants are always busy browsing the leaves and stripping the bark for food as well as moisture.

This is so amazing to watch. Mostly clients stop at a moment and watch the showing off of nature for a minimum period, based on this moment alone and if this was all the park had to offer. There is really nothing quite as special as seeing wild animals in their natural habitat.

Some of the animals species at Mapungubwe National Park include; the black and white rhinos, elephants, and also the three big cats like lion, leopard and cheetah, illusive wild dogs thus it is really interesting and amazing to watch those animals in the park.

Did you that it is of a great experience to have a game drive in Mapungubwe National Park. Going on a game drive is often time the best way to spot the wildlife and some bird species in the park.

The activity is carried out by armed and experienced guides who know all the spots where certain types of animals like lion, elephant, leopard, are likely to be seen during different times of the day, Mapungubwe offers a morning and evening game drives, daily thus having the best experience in African wilderness.

Mostly the recommended vehicle to use is a 4WD this is because it is strong and the roads are rough and poor especially during the rainy season.

If you can want to explore or have an opportunity to learn  African history, Mapungubwe has it all. I think it is very paramount to building an African-rooted identity amongst Africans that is proud. Over 2000 years of human history and the culture of the Shona and Kalanga people can be uncovered here.

What makes it special about this experience, is the way how the history was narrated by a man of African/Shona decent whose ancestors are the Mapungubwe people. And the feeling you get after standing next to San Rock art which was printed 2000 years ago.

You may still wonder  the exact circumstances when these simple masterpieces were created and their way of life because it was really amazing. No wonder Mapungubwe National Park is a World Heritage Site, and the park boasts around 150 extraordinary rock art sites that can be explored as part of a three and half-hour guided walk.

The  Park has various walking safaris which are very interesting and fun to engage in , like the Treetop Walk which is a raised boardwalk through the park’s riverine forest that will ignite all the senses. This activity is carried out the experienced guides who know more about the park, the safe and dangerous places and ready to help incase of any injury by the client

To make the most of the sights and sounds around you, take a seat on one of the many benches and lookout to the point.  Therefore Part of the tranquil walk is the Treetop Bird Hide on the banks of the Limpopo River.

Binoculars will come in in order to view tiny and far species while on the canopy while enjoying and playing around the tree branches. Walk between fever trees, breathe in fresh wilderness air and open your ears to the sounds of bee-eaters, African fish eagles and Burchell’s coucal.

From your seat up in the canopy, you maybe able to spot one of Mapungubwe’s many mammal species like elephant and waterbuck among others, while viewing the beautiful sceneries around the park, like the un spoilt savanna vegetation and the flowing rivers with in the park. 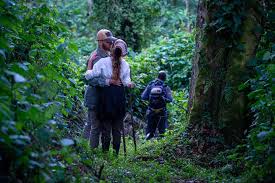 These trees are gigantic with 31m in circumference and are characterized with the overall appearance and nature of the site with the striking feature that differentiates the park .At Mapungubwe, you will have the opportunity to come up close and personal with several impressive baobabs.

To add to their glory, baobabs are also home to several bird and bat species which pollinate the  flowers with in the forest, while the giants’ seedpods are eaten by animals such as baboons, elephants, rhinos and warthogs.

Don’t miss out taking pics while at Mapungubwe with one of the park’s baobabs. The ‘upside-down tree’ is a living monument to the majesty of nature. thus having a great experience.

A good time to visit Mapungubwe is from March to May after the rains when the air is free of dust, and the heat is less oppressive than in the middle of summer. Rainfall is scarce most of the year, but when it does occur, it’s during the summer.
In period, it is easier to view most of the wildlife like herds of elephants, pride of lions, zebras and also the bird species during the migratory period
During this period between may to September, the landscape is dry and dusty with sunny and blue skies, honestly the days are beautiful with stunning sceneries including the pleasant temperatures within the park view.

Mapungubwe National Park is located about 520km north of Johannesburg near the border with Botswana. This Park is a self drive destination and approximately 35km off road network and the park is accessible to normal 2WD vehicles, and a further 100km is accessible to all-terrain 4WD vehicles.

The most recommended one is a 4WD  this is because it is strong and the the roads are not good conditions most especially during the rainy season so the strong vehicle is needed.

You can also use O.R. Tambo International Airport (JNB) in Johannesburg and drive from there. O.R. Tambo is where most visitors enter South Africa, and drive directly to destination or wait to be picked up by a tour operator.

The nearest airport is in Polokwane and is 200km from the park. It is possible to take a connecting domestic flight from Johannesburg to Polokwane to reach the destination.

There are a number of South African National Parks camps in the Mapungubwe area, all offering a range of self-catering lodges, wilderness camps and tented camps.

Some of the Mapungubwe camp include; Limpopo Forest Tented Camp, Mazhou Camping Site, leokwe camp among others.

Guests staying in National Parks accommodation should check in at the Mapungubwe Main Gate when arriving. Most of the accommodation facilities in the Park is made up of self-catering, fully equipped cottages or tents.

There are no shops in the Mapungubwe National Park and visitors will need to take all of their own supplies including food, sunscreen, hats, binoculars, drinks and firewood. to cater for their stay at the destination and the fee includes activities like sightseeing, nature walks game viewing and entertainment like silent Disco.

The park offers various activities like bird watching, game drives, safari walks and many others this is because it is strategically located with un touched wilderness.

For more information you can make your bookings with KUBWA FIVE SAFARIS because the members of the team are passionate about their work and ready at your service.