The best 5 reasons to visit Camdeboo park include; rock formation, wildlife, birding, scenic view, and nature walks. Camdeboo national park is located in the Karoo and almost completely surrounds the Eastern Cape town of Graaff-Reinet. The Park was proclaimed as South Africa’s 22nd National Park under the management of South African National Parks on Sunday 30 October 2005 and covers an area of 194 square kilometers.

The Park is located in the foothills of the Sneeuberge, or Snow Mountains, with an elevation of between 740 and 1480-metres above sea level. Following an extensive process of negotiation and discussion between government, conservation groups, and concerned stakeholders, Marthinus van Schalkwyk, Minister of Environmental Affairs and Tourism, announced the intention to proclaim South Africa’s 22nd National Park in the area surrounding Graaff-Reinet.

This was made possible by the World Wide Fund for Nature in South Africa (WWF-SA), which donated the 14500 hectare Karoo Nature Reserve to be the centerpiece of the project. A public consultation process was followed to decide on the new name for the park, culminating in the choice of Camdeboo National Park.

The Karoo Nature reserve was established in 1979 when the International Union for the Conservation of Nature and the World Wildlife Fund recognized the urgency for conservation measures in the Karoo biome and listed this action as a world conservation priority.

The best 5 reasons to visit Camdeboo park are explained below;

Camdeboo National Park stretches across 19 405 hectares and literally surrounds the Eastern Cape town of Graaff-Reinet.  When the park’s Nqweba Dam, , covers a substantial part of the park. The valley is barren, characterized by its huge dole-rite pillars, some of which are 120 meters high. This place is also know as “Valley Of Desolation”, is the most popular attraction in the national park. This is one of the best 5 reasons to visit Camdeboo park.

Some people call it the Valley of Desolation as the ‘Cathedral of the Mountains’, as it provides a spiritual experience for many tourists who are moved by the eerie silence and the unique beauty of the place, providing them with a deep awareness of the amazing environment. The dolerite pillars can be found in the famous Valley of Desolation, a geographical wonder that is millions of years old.

The magnificent volcanic, corrosive handiwork of Mother Nature is abundantly clear when the sheer cliffs and rock formations are viewed from the park’s many scenic routes. Camdeboo National Park offers a number of different walking trails that provide opportunities to hike in the park, ranging from walks that last an hour to extended hikes where overnight camping is required.

There is also a picnic site for those who simply want to revel in wonder at the strange and magnificent rock formations. There are 43 mammal species found in this park. Visitors stand a good chance of seeing steenbok, black wildebeest and blesbok when driving in the more open areas. Animals that enjoy the thickets include the kudu and grey duiker. The Cape buffalo is not seen that often, but red hartebeest and gemsbok are frequently spotted. The Cape mountain zebra will sometimes be seen, but it is mostly found in the mountainous parts of the reserve.

The park is filled with a variety of wildlife in the vast area it occupies. Many of the animals show a variety of adaptations to survive in the arid and unstable environment of the Park. The springbok is remarkably well-adapted, deriving its water requirements as a by-product of metabolism and seldom, if ever, needs to drink. The herpetofauna has been well-documented and includes 5 frog, 5 tortoise, 19 lizard, 4 fish species, and 10 snake species are found within the park. Making it one of the best 5 reasons to visit Camdeboo park.

Outbreaks of the brown locust and cyclical eruptions of the harvester termite and karoo caterpillar and their influence on the vegetation, are characteristic features of this unstable but resilient ecosystem. 43 mammal species are found within the park of which 11 are rodents and 13 carnivores. The crepuscular bat-eared fox is often seen hunting by the use of its large ears to locate insects while the communal behavior of the suricate (meerkat) can be fascinating to watch.

Vervet monkeys,  are usually seen with tails shortened to varying degree by aggressive interaction within the troop or group, inhabiting the Acacia forests and adjacent plant communities. These primates are not supposed to be fed because this practice subverts their natural behavior and creates problem animals, which may later have to be destroyed.

Most animal species regularly sighted by visitors include; steenbok, springbok, blesbok and black wildebeest in open areas of the park. Those that inhabit the thickets include the kudu and grey duiker which are common as well as the less often seen Cape buffalo. Red hartebeest and gemsbok are frequently observed in the transitional vegetation types.

Cape Mountain Zebra may be seen from time to time but prefer the more mountainous areas of the Park while the klipspringer is well-adapted to the rocky habitats of the park with hooves adapted to enhance their grip on the rocks due to pneumatic spaces in the tips of the hooves. 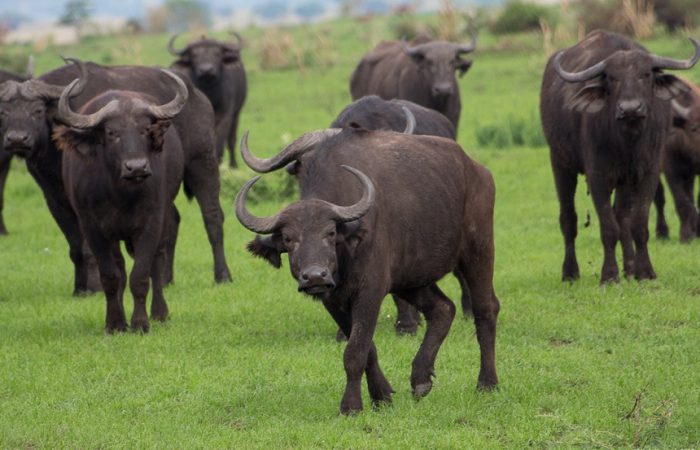 Bird watching is also one of the best 5 reasons to visit Camdeboo park. The park consists of more than 249 bird species have been recorded in the Camdeboo National Park’s diverse array of habitats. Many of the Karoo endemics are restricted to the western portion of the Karoo and the park does not hold as many Namibia-Karoo bio-me-restricted assemblage species as do the parks further west. Despite this, it supports many important populations of threatened species, typical Namib-Karoo species and many other arid-zone birds.

These riverine belts are of particular importance in the Great Karoo because they act as corridors along which many species are able to move in otherwise unsuitable terrain. The Cape Rock Thrush Monticola rupestris, Pale-winged Starling Onychognathus nabouroup and Ground Woodpecker Geocolaptes olivaceus occur in rocky gorges and kloofs.

Black-headed Canary Serinus alario occurs seasonally whenever there is seeding grass and water. Lesser Kestrels Falco naumanni have a large roost near Graaff-Reinet’s railway station and are frequently seen hawking over the park. The Nqweba Dam is occasionally used by Greater Flamingo Phoenicopterus roseus and Lesser Flamingo Phoeniconaias minor.

Both African Grass Owl Tyto capensis and Baillon’s Crake Porzana pusilla have occurred historically. Although neither has been recorded recently, there is plenty of suitable habitat in the marshy areas around the dam and it is thought that they may still occur here.

There is something remarkable about standing quietly on the various precipices surrounding the Valley of Desolation. The deafening silence that embraces the rock-faces tells a story without saying a word. It narrates a hundred million years’ of Mother Nature’s power and eternity, and when compared to our human frailty, the experience is almost otherworldly.

The park’s setting – being amongst one of the oldest natural wonders – at the foot of the mountains, next to a dam, close to a river, surrounding one of the oldest towns in South Africa and being home to a multitude of animals, birds and plants depicts beauty and life, no matter what direction you are looking at. Waking up for early fort the sunrise is worth it every time.

You will definitely enjoy seeing some of the stranger creatures, from ‘jumping antelope’ to earthbound birds. The white faces and golden coats of the springbok can be seen hopping (their name is derived from the word jump) over the plains. They are joined by the flightless ostrich, the largest bird in the world, which is also one of the most fascinating of creatures. Making it one of the best 5 reasons to visit Camdeboo park.

Having the vast land it has, the park also provides opportunities to have nature walks that have many experiences also making it one of the best 5 reasons to visit Camdeboo park. The Crag Lizard Trail (45 minutes) starts at the Valley parking area and extends for about 1.5km via the Valley viewpoints. It is marked with the Crag Lizard logo. The Eerstefontein Day Walk starts and ends at the Spandaukop gate.

There are three route options of 5km, 11km and 14km with good rest spots at Eerstefontein and Agtersfontein.  The Gideon Scheepers Trail is an hour long walk, starting at the Gideon Scheepers Monument, which commemorates a historic figure, and ending at Barbergat on the R63 to Murraysburg.  There is no charge for hiking trails in the park, apart from conservation fees.

Other than the best 5 reasons to visit Camdeboo national park, you can also have other activities like water sports, picnics and other facilities that are in the park.

When to visit Camdeboo national park

The park is visited throughout the year by tourists all around the world. Though the best months for good weather in Camdeboo National Park are January, February, March, April, May, June, August, September, October, November and December. On average, the warmest months are January, February, March and December. Camdeboo National Park has dry periods in May and August. The coldest months are June and July.

How to get to Camdeboo national park

You can also drive from Cape Town via the Garden Route over a week or two to Graaff Reinet, the entrance gate to the park.  By air; Once in South Africa, it’s possible to take a connecting flight to Port Elizabeth Airport (PLZ) and rent a car there. The distance to the park from Port Elizabeth is just over 250km/155mi and takes about 3 hours. There are several carriers offering scheduled flights to Port Elizabeth.

Accommodation in South Africa is classified into three categories that all cater for a certain group of clients in terms of how much one can afford; Luxury accommodations, mid-range accommodations, and budget options.

These are the ones that are made for those tourists who are willing to pay as much to live luxuriously while in the The park.

Trail running along the paths up Spitskop & you can be able to practice wildlife photography . The views from the pool are magical. It is also children friendly. Offering restaurant, accommodation and many other amenities at a price of USh 740,591.

These are accommodations made for the class of tourists who are willing to live luxuriously but not ready to pay hefty amounts of money.

These are the accommodations that are made for tourists who are not willing to pay heavily to live luxuriously to live in South Africa.

Kubwa Five Safaris is the tour company to have with such trips to South Africa because of its priorities of having a luxurious and comfortable trip. For more information contact kubwafive-safaris.com