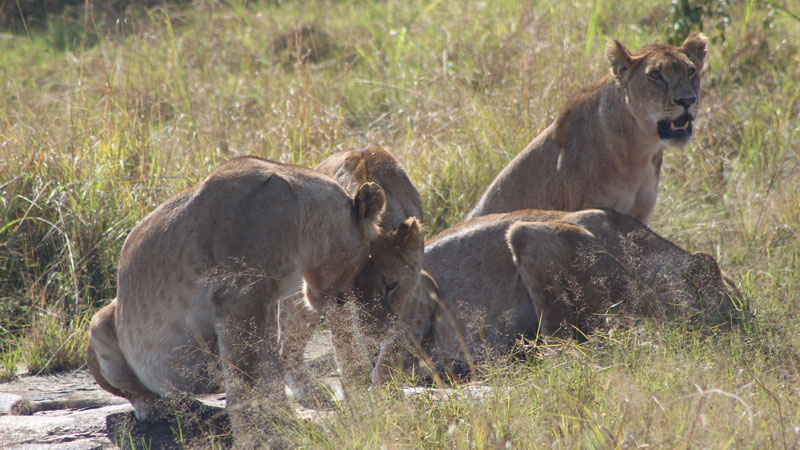 Kruger National Park is the oldest park in Africa and the largest in South Africa where it is situated in the northern region between Limpopo and Mpumalanga provinces. The park sits on a whooping 19.623 square kilometers.

She is home to over 147 mammal species, 500 bird species, 114 reptile species, 49 recorded fish species and 2000 different plant species among others. The best 10 common animals in Kruger National Park are discussed as follows;

Kruger National Park is home to the highest number of large land mammals in Africa. As part of the Big Five, there are over 12,000 Elephants trampling on the soils of Kruger. These gentle giants are a wonder to see. You can never go to this park and fail to spot elephants.

African elephants happen to be the largest land mammals in Africa and the world at large. They embrace communal living and can easily be seen in groups. Did you know that elephants have a really long gestation period of almost 2 years? That is amazing!

As we all know, the lion is referred to as the king of the jungle and it also happens to be part of the Big Five crew. Being one of the most aggressive hunters at the park, most mammals are afraid of the lions.

Kruger National Park has over 1500 lions, you will come across several prides where you will see cubs nursing or just playing with each other. You might also see some lions enjoying their prey.

The park harbors over 5,000 African Rhinos some of which are black and others are white (this is about their species not visible colors because their color is uniform). They are also part of the famous Big Five however, the rhinos at Kruger National Park are an endangered species as a result of poaching activities.

However the great news is that there is a very large team of armed and trained rangers whose sole duty is to protect these animals against poachers. A well established 24 hour surveillance system is already operating to ensure the Rhino’s safety.

The park has over 2,500 buffalos (part of the Big Five). These aggressive animals are quite communal. You will definitely witness their communal side. Cape buffalos have really hot tempers (more like anger issues) and they can change from peaceful to aggressive in a matter of seconds.

This is why they are feared and would rather be seen from a distance. Lions love preying on them, but buffalos are the most difficult prey because they know how to defend themselves using their tough horns and hooves.

These are the last bunch in the Big Five which I have been mentioning. Unlike lions, leopards are solitary animals, rarely will you find them living in groups, this solitary nature helps them to concentrate when hunting and to also enjoy all the rewards of hunting without having to share.

Kruger National Park is home to over 1,000 leopards, this is so amazing and they are such a delight to spot. Leopards are skillful hunters and they like working in the dark.

This mischievous bunch is a regular sighting at Kruger National Park. With their slightly light brown far filled with dark brown spots, this is how spotted hyenas earned their name. They are actually the kings of scavengers because they spend most of their time eating other animal’s leftover prey.

With their strong teeth and jaws, spotted hyenas can also do their own hunting where need be. Their naughty laugh makes them seem unserious at all times, but do not be deceived, they too are dangerous animals.

Cheetahs are the fastest land mammals in the whole world. It is to no surprise that they have long legs that take long strides and appear to be stream lined for speed. Unlike the lions who enjoy communal living, cheetahs are solitary animals.

You may be able to spot a mum and her cubs once in a while or a group of not more than 5 but normally, cheetahs hang out alone. Among the big cats we have in Africa, cheetahs are the smallest in the Big cat family. Their spotted golden hides are great for hiding and camouflaging in the savannah grasslands and woodlands when hunting in Kruger National Park.

Cheetahs are great hunters who enjoy preying on smaller animals like antelopes. However when the hunt involves more than one cheetah, they can go for larger prey as well. They are most likely to be spotted in the southern part of the park.

Giraffes are not only lovely to look at with their beautiful patterns and long necks, they are also the tallest animals on earth. When fully grown, their necks can reach a whooping 19 foot! Yes you heard that right. Giraffes are quite friendly actually.

These gentle giants are common all over Kruger National Park so you will definitely spot several at the park. Giraffes are communal but stay in small groups. They feed on leaves, with the help of their very long tongues and necks, they get to reach and eat the freshest shoots and leaves on tree tops.

Giraffes defend themselves by running, striking with their long necks and kicking at their attackers.

The wild dogs (also known as painted wolves) are a delight to see at Kruger National Park. They are very loud and restless, their hyper nature and endless playful barks will give you a real wild feeling.

The African wild dogs in the park are one of the four remaining endangered population in Africa. They live in packs and are a very strong unit which works like a well oiled machine. Their joint efforts make hunting easy and quick. These dogs usually hunt in the dark or during evening hours.

These wild dogs have multi-colored fur made up of white, brown, tan and black patches, you will enjoy looking at them. They are very fast and not big bodied. They actually look like ordinary dogs when you see them playing among themselves.

Hippos (short for hippopotamuses) are fun to watch as they lazily float in the shallow waters at the park. They appear nice and actually look harmless but please do not buy that, hippos are the most dangerous animals in the wild because they have caused the most deaths to people than any other animal.

During day time hippos love swimming and relaxing in the water and only step out to graze after nightfall. Hippos love hanging out with each other. They are communal in nature. You will surely enjoy watching them when you visit Kruger National Park in South Africa.

Other than the best 10 common animals in Kruger National Park, the park is a safe haven to so many different forms of wildlife species and birds, examples include; Impalas, waterbucks, common warthogs, greater kudu, nyala, antelopes, wildebeest, black-backed jackals, reedbucks, common eland, zebras, vervet monkeys, chacman baboons, honey badgers, hyrax, foxes and so many other animals.

To further enjoy seeing all the beautiful and majestic animal species in Kruger National park, you can book your tour with Kubwa Five Safaris because with them, you are assured of having a memorable thrilling African safari experience.