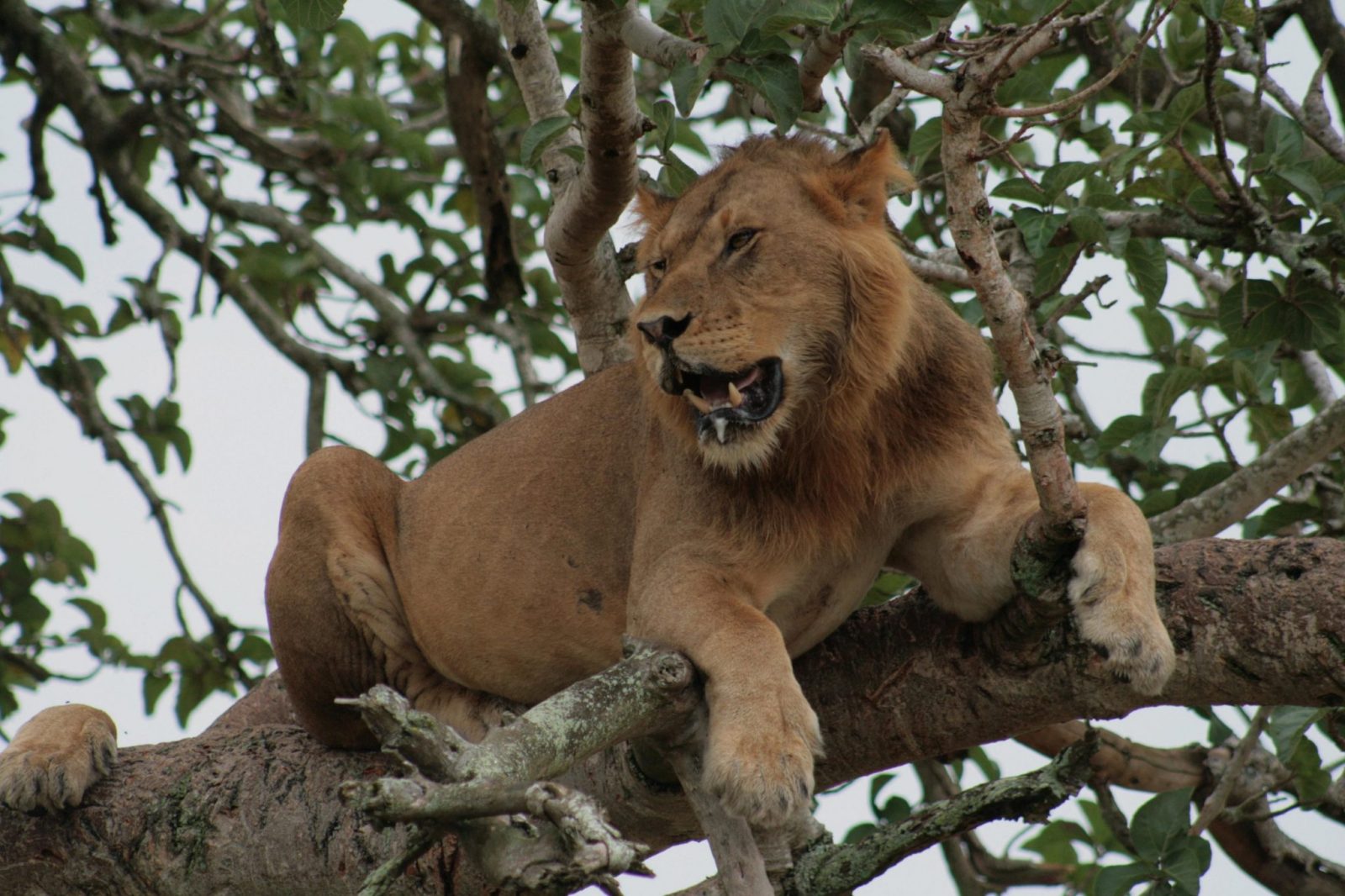 7 top reasons to visit Queen Elizabeth NP-National Park. Among the biggest gifts of nature to Africa & the entire world at large the park leaves you awestruck.

The Queen Elizabeth National Park in Uganda is the largest biotic area in Africa.  Numerous plant and animal species live in the park, including the hippo, tree-climbing lions, elephants, swamp antelope, Uganda-kobs, topis, water bucks, bush bucks, reed bucks, duiker, and many others.

It is home to over 95 mammals and more than 600 different bird species. The park is also Uganda, the Pearl of Africa’s most popular tourist destination. A variety of trees, vegetation, hills, valleys, grassland and crater lakes can all be seen and found there. The wonders of nature within the park are too precious to be discussed in just one sentence. Here are 10 Top Reasons Why You Should Visit Queen Elizabeth National Park.

Wildlife exists in abundance at this park, this is characterized with over 95 mammals such as; the Big Four (Lions, Leopards, Elephants and Buffaloes), spotted hyenas, warthogs and over 600 bird species like the African fin-foot, black bee-eater and Caspian plover among others.

These attract so many tourists from all over the globe. They are helpful for those that tour for pleasure and those that do so for research and study purposes.

With over 250 lions, this park is one of the best lion conservation units in Uganda and Africa at large. The lion tracking experience further makes this park worthy of your visit because no other place offers this activity in a manner that is as authentic and African as Queen Elizabeth does. This is practiced at the plains of Kasenyi and it involves allowing tourists to get close enough to the lions and spending some time with them as they reside in their natural premises.

This experience is conducted by well-trained park rangers as they assist tourists to navigate and learn about the feeding habits, behavior and so many things about lions. This rewards tourists with firsthand information. I encourage you to join them while visiting the park.

The presence of tree climbing lions at the Ishasha sector that are spotted by tourists while on game drives further more adds to the thrill of touring Queen Elizabeth National Park. The park is known to have the largest population of tree climbing lions in the world. These majestic animals are mostly seen clad high up on huge tree branches as if having a family meeting. The fact that they are able to climb trees makes them exceptional compared to other lion species.

This is the major activity that attracts hundreds of tourists from all over the world to visit Queen Elizabeth. When on a game drive, you will be able to see most of the wild animals in the park for example; lions, buffaloes, giraffes, chimpanzees, the Uganda kob and so many others. Several birds will also be within your view. These game drives are mostly conducted at Ishasha, Mweya and at Kasenyi plains. Watching the beautiful animals and creatures in their natural habitats is an experience you would not want to miss out on.

The park is endowed with large numbers of chimpanzees. These are habituated which simply means that they are trained to accommodate the presence of human interactions without feeling threatened.
Chimpanzee trekking involves tourists waking up very early in the morning for a brief run through of the do’s and do nots of the trek and then walking on foot under the guidance of well-trained game rangers in search of the habituated (as earlier explained) chimpanzees to spend time with them for purposes of research, having fun like taking photos with them and for educative studies. This is actually therapeutic and is a creative way of making friends from the wild.

The park is a haven to over 600 different bird species. Some of these are forest birds, water birds or migratory birds. Their presence and in large numbers have created one of the best bird watching sanctuaries in the park. This can be done any time of the day however, early morning hours or evenings are most ideal for bird watching. While following well known birding trails, experienced tour guides enable tourists to see several types of birds some of which may include the following; African Fin foot, Great white Pelicans, African Skimmer, Black bee-eaters, the Palm nut vulture and so many other bird species.

You will be able to take as many pictures as you want and you can record videos to remember some of the beautiful and unique sounds made by the birds.

This is the most thrilling and exciting activity done at the park. It takes place on the Kazinga channel which connects lake George to Lake Edward. For 2 or more hours, tourists are able to see hippos, crocodiles and fish in water while at the same time watching buffaloes, warthogs and elephants at the shores. Since some bird species are water birds like the great white pelicans and fish eagles, these too can also be spotted while cruising.

The general appearance of the area surrounding Queen Elizabeth National Park is made up of forests, Valleys, hills, lakes and so many other breath-taking features. As if that is not awesome enough, the numerous mammals and birds give more life to the entire park.

These are so much fun in that you get a chance to explore the park on foot. Ample security is provided to make sure that you do not encounter any surprise attacks from animals. Nature walks are refreshing and are a lovely way to stretch your legs after sitting for so long.

Forests like Maramagambo are ideal for such, with this you get an opportunity to interact with primates especially Chimpanzees, vervet monkeys, red tailed monkeys among others. Birds are no exception when on forest trails, their beautiful sounds will overwhelm you.

When To Visit The Queen Elizabeth National Park?

The park is open throughout the year however, December to February and June to September are the best months to book your safari. This is because they are the dry months hence having ample sunshine to make touring fun and free from rain, mud and unnecessary coldness.

How To Get To The Queen Elizabeth National Park

The park is almost 250 miles from Kampala and so you can get to it by air from either Kajjansi Airfield which is near Kampala or from Entebbe International Airport. Book a flight and in about 2.5hours you will be at the park.

You can also endure an 8 hours road trip on a comfortable tour bus or using private means. Whichever way you decide to use to get to the Park, a huge adventure that will blow your mind awaits you.

Where To Sleep In Queen Elizabeth National Park | Accommodation

Do not be worried about where you are going to stay and sleep when visiting Queen Elizabeth National Park. Different hotels, lodges and inns are at your disposal for you to stay at. Regardless of the class of your choice, they have you covered. Here is how;

Mweya Safari Lodge, Elephant Plains are some of the most luxurious places available to offer you first class treatment and services while on your stay at the park.

This is also really good accommodation for you when you are willing to spend but not so much while at the park. Irungu Safari Lodge, Buffalo Safari Lodge, Engiri Game Lodge and Queen Elizabeth Bush Lodge will offer you the best mid-range accommodation.

This is for tourists who have a budget that they cannot exceed. Bwizi Gardens And Resort, Marphie Hotel Rukungiri and so many others are ideal for you if you are within a budget.

To get the most out of your stay, please book any hotel of your choice preferably a month before at least. Online bookings are possible as well.

Located in the Western part of Uganda and occupying 4 whole districts i.e, Rubirizi, Kasese, Rukungiri and Kamwenge district, Queen Elizabeth is the 2nd largest and one of the oldest National Park in Uganda. She had her name changed from Kazinga to Queen Elizabeth as a way of honoring the visit of the Queen of Great Britain.

Warm weather prevails in Queen Elizabeth National Park.
The entire year, temperatures are constant.
Around 29°C/84°F is the high temperature during the day, while around 17°C/63°F is the low temperature at night.
There is always a chance of rain in Queen Elizabeth National Park because there is no true dry season.
Mid-December through February has the least amount of rain, with June and July seeing the least amount of rain.

January to February and June to July are the dry seasons.

March through May and August to December are the wet seasons.

Make it a point to show yourself enough love by visiting Queen Elizabeth National Park, she will give you thousands of reasons to fall in love with nature as well. From the conserved Lions and through numerous other plant, bird and animal species, there is so much beauty out there waiting for you to feast your eyes on.