Other contributing factors that attract visitors to Tsavo West includes its own diverse and abundant wildlife, the rhino reserve, Mzima Springs, a solid network of roads, and the potential for rock climbing and guided walks.Tsavo West National Park is more mountainous and more diverse in its landscape.

Kichwa Tembo is one of the most popular rock faces to climb with an elevation rise of 984 feet (300 m).  A permit is required and early starts in the day are recommended with temperatures often getting hot as the day progresses.  Other popular climbs include Ivory Tower, Mastodon, and the Great Tsavo Chimney.

The Big 5 which are lions, leopards, elephants, rhino’s andBuffalo’s are all seen within Tsavo West national park. Many other species include hartebeest, kudu, giraffe, buffalo, hippopotamus, as well as many other species that migrate between Tsavo East and Tsavo West.

Birdwatchers also have plenty to be excited for with over 500 species of birds found within Tsavo national park.  Ostriches are the largest birds however, they are accompanied by kingfisher, hornbills, herons, starlings, weavers, buzzards, kestrels, among others.

Shetani lava originated naturally about 200 years ago as a result of a volcanic eruption that led this lava from the eruption to flow forming shetani . The local community woke up to this strange phenomenon and concluded that the changes were caused by Shetani (the devil), emerging from the ground. The area resembles a garden that has been dug up and that was one of the reasons why the locals were so baffled by it. The lava expands across Chyulu Hills for 8 km and is 1.6km wide and 5 metres deep.

Mzima is a hot oasis in the Tsavo area in the western part of the park 48km from Mitto Andrei. The origin of the springs is impressive as Water is said to have sprung out of nowhere forming four beautiful pools. The clear, freshwater pools spring from underground streams coming from the Chyulu Hills. Mzima Springs serve to be the main source of Mombasa City’s water supply. The springs produce about 250 million gallons of crystal clear waters daily .

Tsavo west national park is blessed with this feature that give a significant scenic view with black colored lava rising Hill in the area. The crater got its name from the Kamba people “chaimu ” which means devil and it’s known to then as the devils crater. On visiting the park one is able to see and explore the crater’s beauty that is nice for photography and scenic views.

Lake jipe is one found in the tsavo west park of Kenya and this acts a territorial  lake along the Kenya Tanzanian border  covering over 30sq km . Jipe lake is famous for its bird and wildlife viewing as many animals like hippos , elephants and lesser come to this point to drink water .

The lake also acts a water area for the other animals in the park. 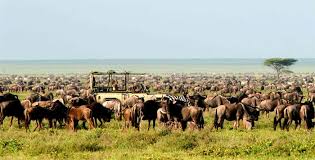 Tsavo national park is the best game viewing destinations in Kenya. The largest and oldest national park of Kenya is gifted with abundant wildlife . It homes all African big 5 members (lions, elephants, Rhinos, Buffaloes, and leopards) all these are permanent residents in the park.

The significance of the park is based on the red dusty African Elephants that are seen in large numbers. Some times in Galan River where they go and sprinkle their young ones with water. Sometimes they are found rolling in the red termite moulds that make them appear red. Under natural conservation, the color of the Elephants are ashy but you will be suppressed when you reach to Tsavo National park where the Elephants are Red.

These hills are estimated to stretch to over 1016 meters above sea level. The five sister hills form five identical conical hills with a scenic  and stunning view. These volcanic cone-shaped hills that form part of the park’s beautiful back drop.

Tsavo West National Park is considered one of the best places to visit for birding with over 400 bird species. Between months of October and January, bird lovers flock to Ngulia hills annually because of its strategic location along one of the world’s busiest bird migration routes to see birds which include River Warbler, Marsh Warbler, Red-baked Shrike, Evreux’s Eagle Owl, Vulturine Guinea fowl, Golden-palm weaver among other portfolio species.

This sanctuary is located on the foot of Ngulia hills spreading to over 90 square kilometers and is surrounded by a one-meter high electric fence to protect about 70 of the parks highly endangered black rhinos from poachers. Suitable times  to see these  shy archaic creatures are at night being they are mostly nocturnal and browsers implying they mostly feed at night and prefer being under thick undergrowth where the endangered black rhino roam

Tsavo west national park hosts the monument of the East African campaign that was fought in the thorny scrubs and forest of Kenya by the Kenyan natives  this was referred to as the last gentleman war that was waged under the code of honor. Tours of this area include the Crater, Kichwa Tembo, and Mzima fort that enables one  to trail the real footsteps of Kenyan guerilla soldiers during the First World War.

Game drives in the park

Game drives in Tsavo are done through the open grass in search for the wildlife in their natural habitats. Enjoyment of great eye to eye view of wonderful animals at the park. Some of the animals to encounter during your game drives include:  Rhinos, Warthogs, Gazelles, Giraffes, Zebras, Impala, lions, Leopards, Buffaloes, Elephants, Hyenas, , Cheetahs, Marsh Mongoose, dyadic, topis and many others.

Game drives in Tsavo are much rewarding and excellent when done by experienced driver guide. Drives are categorized into 3 categories : Morning game drives, Afternoon/Evening game drives and finally Full day game drives. Each category of the  has targeted wildlife species to encounter hence making them all desirable and relevant.

One can access the park from Nairobi through Mitto Andrei, from Mombasa through Tsavo gate and Chyulu gate from Amboseli.

In conclusion , Tsavo west national park ranks the top destination one should make a reality visit for adventurous and wildlife safaris while in Kenya. Kubwa 5Safaris is your best guide and operator for all your African safaris as its A Thrilling Vacation experience is at your exposure.