When To Go And Where In East Africa

Let us talk about when to go and where in East Africa, in other words, the best time to go on safari in East Africa. and best places to visit in Africa. As you plan for your African vacation, you will need to be in the right place at the right time.

East Africa (Kenya, Tanzania, Rwanda and Uganda) is at it’s best in their winter months of mid-June to October when the parks are dry, the weather sunny and the wildlife excellent. The peak wildlife season in Southern Africa is actually fairly similar with the best months being from May through until the end of October.

One thing to be conscious of is when to go to avoid the rainy seasons in each region. East Africa has two rainy seasons and is mainly dry and nice in between these rains. The short rains come in November, and then there is a mostly dry break between then and late March when the long rains arrive, lasting until the end of May. November is still a good time to visit for fantastic wildlife, though April and May should probably always be avoided in East Africa as it is really very wet.

There are, of course variations of this from country to country and area to area, so if you are not sure when to go to where, just pick up the phone and ask an Odyssey expert.We can also let you know the best times to go to maximise wildlife opportunity whilst avoiding peak season prices

There is no single best time to visit East Africa but there are rainy and dry seasons. Each has its advantages and each destination has its best moments, not least in the Maasai Mara/Serengeti where the seasonally-driven wildebeest migration takes place. If you have already decided when you are going on safari, it’s now time to choose where to travel to; if your dates are flexible, you can plan your safari better by understanding East Africa’s seasonal trends.

Kubwa Five Safaris has split the year up into three periods to coincide with the main phases of the wildebeest migration and the rainy seasons.

At a glance: Expect warm temperatures and short rains. Game viewing in the Serengeti, diving in Zanzibar and gorilla trekking in Uganda and Rwanda are excellent choices now.

Weather: This is summer in East Africa. Temperatures are warm and pleasant with an average high of 28°C and an average low of 15°C. The rains from early November to late March are usually scattered and localised with short-lived downpours. There is often heavy rain in late March.

At a glance: Don’t be put off by the long rains: safaris are still good in the Serengeti, Lake Manyara and Masai Mara. It’s also less expensive and popular destinations are less crowded.

Weather: The long rains arrive and heavy showers can be expected for a few hours every day or so. Avoid the hot and humid East African coast at this time as well as Uganda and Rwanda – rain is torrential.

At a glance: Mild temperatures and classic dry-season game viewing make these months a popular time to visit East Africa. Book accommodation and tours well in advance, especially if it’s the wildebeest migration you want to see. Visitor numbers peak in August.

Weather: The October to  December short rains in Tanzania and central Kenya notwithstanding, these months are mostly dry and sunny forcing animals to gather at permanent water. July to September offers the most pleasant weather in East Africa, especially along the coast.

Did you know that Uganda has the highest percentage of Mountain Gorillas in the world? There are currently less than 1200 mountain gorillas left in the world and almost half of the population resides in Bwindi Impenetrable National Park. Gorilla trekking is one of the top activities while on a safari.

Visit Uganda and experience a lifetime memorable activity that you can’t easily forget, and that is why thousands of foreigners flock to the country annually to have trek mountain gorillas.

The tracking permit in Uganda for the gentle mountain giants is reasonably priced at US$700 per person compared to the neighboring country, Rwanda which is US$1,500 per permit per person, and there greatly more to experience on a visit to Uganda like lion tracking, chimpanzee tracking, and rhino tracking.

The best time to visit Uganda for trekking Gorillas is during its two dry seasons; between December and February, and between June and August when conditions are particularly good for trekking to see mountain gorillas and chimpanzees. Game spotting in national parks is also good at this time, as well as between February and March. 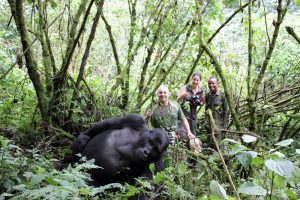 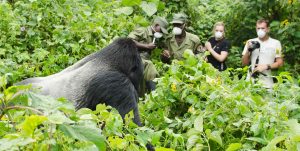 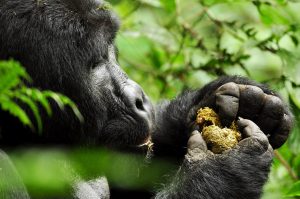 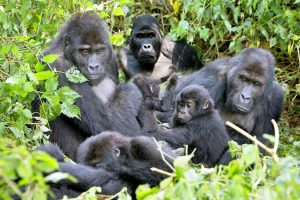 In A Nutshell: When you think about it, it’s always a good time of year to travel to East Africa – it just depends on what you want to see, do and experience.

Travelling between March and May (the first rainy season of the year) means you’ll have to look a bit harder for wildlife; the bushland is dense, so it’s much easier for the animals to hide – but the landscapes will be a vibrant green. If you can handle a few showers each day (and the occasional drenching downpour), this is a beautiful time to visit.

April to September is when the Great Migration northwards happens, when tens of thousands of wildebeest crash their way across East Africa, from the Serengeti to the Maasai Mara, in search of food and water.

June to October is generally dry and cooler – and the busiest time of year – while the second wet season rolls through in late-October and lasts until December. By January, the rains have stopped and the area enters its first yearly dry spell.

So when is your favourite time of year to visit? February. Below are the reasons why.

It is a great year round safari destination, and each season has its advantages. Factor in your budget, your appetite for crowds and busy sightings, and what you are hoping to see (trek gorillas, predators, the great migration, river crossings, or general wildlife). If in doubt, get in touch with one of our team safari experts who will help design a custom itinerary for you that matches your requirements perfectly.

What is your favourite time of year to go on safari in East Africa? Let us know by writing to us.

We hope have given a detailed helpful information about the best times to visit each country in East Africa and also the best countries to visit in each month and as well as the best places/national parks to visit.