Where is Saadani National Park located?

The park is the only place where the wild meets the ocean. One can say it’s the place where ‘the bush meats the beach’. The park is located at the Indian ocean on the northern coast of Tanzania making it the perfect destination for a cool safari. While at saadani you are to enjoy both the mainland and marine fauna and flora within their natural setting.

The park is very prominent for international nature lovers. While at the park you will enjoy the best sunbathing as you are interrupted by the wild animals that come to take some water. On a game drive to Sadaani, you can see a surprisingly wide range of grazers and primates. You will get to see giraffes, buffaloes, warthogs, common waterbucks, reedbucks, hartebeests, wildebeests, red duikers, greater kudus, sable antelopes, yellow baboons, and velvet monkeys

1. Vegetation of the Saadani national park

Saadani national park has got a fairly unique vegetation with the mangrove forests situated around wami river plus the Indian ocean. Savannah grasslands, coral reefs and the acacia woodlands are the family members of this park with the cotton plain and the areas dotted with palm trees.

Expanding the diversity of this park further is the Madete marine park which forms part of the park and preserves the endangered green turtle. The best time for hatchlings is July through to September and a wonderful thing to witness as the baby turtles hatch and immediately take to the enormous Indian ocean probably never to return to the beach after its birth for up to 50 years.  Tourists can enjoy their picnic lunch amongst fantastic hippo pods and crocs relaxing on the banks of the Wami river. 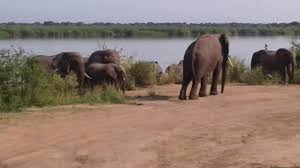 The eastern region of the park is comprised of beautiful white sand beaches created by the Indian ocean with a beautiful view of the waters where you can swim into the vast blue ocean waters which is safe and free, here visitors have to be aware of the green sea turtles that come to breed and some times spot humpbacks and dolphines.

There are hot air balloon safaris at the park giving the best aerial view of the game and the park at large with the ocean inclusive.

Her tourists get chance of visiting the local people to learn more amount their culture and norms through traditional dance, poems, drama and explore African fishing and learn how these people survive.

Bird watching safaris at saadani national park are surely the best with the plenty of bird species and some of the migratory and endemic species like crown eagle, lesser kestrel, lanner falcon, mangrove kingfisher, flamingoes, little biter among others.

Saadani national park offers the best fishing safaris as you can take part in the activity and here you can use the locally made canoes or boat provided by the park and visitors will enjoy the several marine species within the ocean.

The best way to explore this national park is by having a walking safari with a knowledgeable tour guide who takes you through the green eye catching vegetation where you get a chance to come closer to the wild and spot a number of bird species like lanner falcon, flamingoes, mangrove, kingfisher, here you can move along the beaches at the border of this national park to feel the calm weather. The unusual mix of this park with the salt flats, Indian ocean, white sand beaches, marine park, river and mangrove makes this an incredibly diverse and special place to explore on foot.

This is one of the best actives to carry out at saadani national park for the best panoramic view of the park and wami river where you get to see wild life on the banks of the river like elephants, hippos, crocodiles among others

Saadani national park is a perfect place for camping safari as you can hire a tent at the park or come with one to enjoy the best wild view right from within the park.

The best time for watching wildlife in Saadani is during the dry season from late June to October  after the rains, in January and February,  when there is still plenty of water on the plains and wildlife stays within the park gathering around the various waterholes scattered across the park. However, the Green Season months of January and February is a lovely time to visit when many young are born, as a beach break destination Saadani is good to visit most of the year, except during the peak of the rains from April to May.

How to get to the park

Saadani is the closest wildlife park to Zanzibar and Dar es Salam, when connecting from Dar es Salaam, you have to drive along a good tarmac road for about 3-4 hours through Chalinze to Mandera village and then connect to the Mvave Park Gate along a rough road covering 65 km, this will get you to the park’s head office.

By air, it is a 30 minute flight from Dar es salam and 20 minutes from Zanzibar, charter flights can be organized and are connected the park from many other major towns making this an obvious, easy and less expensive safari destination and an obvious combination with Zanzibar beach.

Saadani national park has got the best luxurious safari packages ranging from the accommodation facilities to the activities within the park. Saadani safari lodge  Adventure,  offers luxury accommodation best located in a quiet cham place on the southern border of the park where you get to see the beauty of  Indian Ocean  combined with the relaxing beach.

Bab’s camp it is 9.8 km away from the park offering luxury accommodation with free breakfast, ample parking, fully stocked bar with all types of beverage and a nice restaurant

kisampa bush retreat is a mid-range hotel with a good location overall for sightseeing, dinning, getting around an recreation