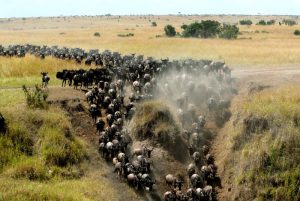 The Best Time To See Wildebeest Migration In Tanzania And Kenya

To witness this movement is truly one of the most magnificent and life-changing experiences which is no wonder it’s been dubbed one of the new seven wonders of the world.

Wildebeest Migration In Tanzania And Kenya

Each year during the Great Wildebeest Migration, over one million wildebeest move through Northern Tanzania and Kenya, searching for fresh grass and water. During this time, they will birth calves, brave crocodile-infested waters, and try to outwit predators such as the lions, cheetahs, and leopards lying in wait.

Some East African populations of blue wildebeest have a long-distance migration, seemingly timed to coincide with the annual pattern of rainfall and grass growth. The timing of their migrations in both the rainy and dry seasons can vary considerably (by months) from year to year. At the end of the wet season (May or June in East Africa), wildebeest migrate to dry-season areas in response to a lack of surface (drinking) water. When the rainy season begins again (months later), animals quickly move back to their wet-season ranges. Factors suspected to affect migration include

During this time many herds of wildebeests and zebras are around the Ngorongoro Conservation Area and in the Southern plains of the Serengeti, the grass there is short and rich, so most pregnant wildebeest find there stay here. The calving season starts at the end of January to mid March; around 600,000 calves are born in this time. Them being born in large numbers it is easier to survive predators than those born few and earlier.

During this time from January to March, these wildebeest migration can be viewed comfortably at a mobile camp, though most mobile camps are faced with the issue of flies so clients who are in for camping are advised to go in for Lake Masek Tented camp, then also midrange travelers can opt for Ndutu lodge as they observe the migration. Those who are into the luxury basis can go for Mwiba lodge, which is located a few kilometers away from Ndutu area so private vehicles can be offered by the lodge to take you to the area to observe the migration.

Wildebeest Migration From April To May

By the end of March to early May, this is considered an off season for observing wildebeests and other animals at large because there are heavy rains in Tanzania by this time. The grass during this time grows so tall and also roads become hard to pass through since the soils are slippery.

At the start of May the grass is already reduced since the population of the animals is a lot, so they choose to migrate looking for more grass. Most of the wildebeests and zebras move to the North via Seronera and the West near Lake Victoria and Serengeti’s western corridor, by this time these areas have enough water and longer grass.

We generally don’t advise you to travel to Kenya during April and May, if you Wildebeest migration is on your bucket list.

Wildebeest Migration From June To July

Early June the wildebeests start to move westwards because there is no enough food where they were. They tend to move to River Grumeti, which is surrounded by a forest and in this forest there are lots of elephants, buffaloes and in the river are a number of hippos and big-starving crocodiles that are ready to eat the wildebeests that come to drink water from the river.

There are different places where one can stay and catch the migration. They range from luxurious lodges such as Sasakwa Hill Lodge, Faru Faru River Lodge and Sabora Plains Tented camp; while here you not only watch the migration but also can have drives off the road, wildlife viewing walks and night drives. Other accommodation facilities where to see the migration include; Kirarwa and Grumeti River camp but while here you cannot do night drives or off road drives.

In July, waterholes on the Serengeti plains continue to dry out as winter advances, while over a million wildebeest grazing soon crops the grasslands to stubble. The herds must keep moving, heading north in search of food and water.

Wildebeest Migration From August To September

The migration heads north out of the central Serengeti, splitting into two routes. The main group heads into the western corridor crossing the Grumeti River in spectacular stampedes. Enormous crocodiles wait patiently to snatch wildebeest as they surge across the river. The wildebeest continue to move steadily across the Grumeti region, making another perilous river crossing to cross the Mara River and reach the lush grazing in Kenya’s Maasai Mara. The smaller group heads directly north from the central Serengeti into the northern plains and from there into the Maasai Mara, avoiding the river crossings.

Wildebeest Migration From October To November

The sheer number of wildebeest arriving in the Maasai Mara area is staggering, as is the variety of resident wildlife – zebra, giraffe, buffalo, elephant, hyena, lion, eland and gazelle to name a few.

From August until the summer rains start in November, the Maasai Mara is lush and green, and offers the best game viewing in Africa. Once the rains start and the wildebeest have recovered their strength, they begin moving south to their Serengeti breeding grounds which are green and lush once more.

Wildebeest Migration From November To December

The rains continue throughout November so the wildebeests continue to move south and east. By December they start moving back to Southern Serengeti to the rich and short grasses. Most herds arrive by the end of December towards beginning of January which marks the end of that cycle.

Other areas in the Serengeti have tall grass growing at a fast rate hence making it difficult for wildlife viewing. So you are advised not to travel at this time of the year especially if you are interested in game safaris.

If you choose to travel during this time of the year, you can catch the migration while staying at Namiri Camp, staying in this area is an added advantage because it has different animals such as the cheetahs and lions. Nonetheless, it worth mentioning that because of these predators there are not many herds of wildebeests seen in this place. Also Klein’s camp could be better for viewing the migration but it has some tsetse flies.

After this cycle, the migration cycle begins again when the female wildebeests give birth to very many calves.

Where is the best place to see the wildebeest migration? Kenya or Tanzania?

Each destination is good at completely different times of the year. The migration is usually active in the Tanzania’s Serengeti National Park for 9 months. It’s most active in Kenya’s Massai Mara National Park for 3 months during August/September/October.

What are the Behaviours of Wildebeest?

Blue wildebeest have both migratory and sedentary populations. In the Ngorongoro, most animals are sedentary and males maintain a network of territories throughout the year, though breeding is seasonal in nature. Females and young form groups of about 10 individuals or join together in larger aggregations, and nonterritorial males form bachelor groups.

In the Serengeti and Tarangire ecosystems, populations are mostly migratory, with herds consisting of both sexes frequently moving, but resident subpopulations also exist. During the rutting season, the males may form temporary territories for a few hours or a day or so, and attempt to gather together a few females with which to mate, but soon they have to move on, often moving ahead to set up another temporary territory.

Each year, some East African populations of blue wildebeest have a long-distance migration, seemingly timed to coincide with the annual pattern of rainfall and grass growth. The timing of their migrations in both the rainy and dry seasons can vary considerably (by months) from year to year. At the end of the wet season (May or June in East Africa), wildebeest migrate to dry-season areas in response to a lack of surface (drinking) water. When the rainy season begins again (months later), animals quickly move back to their wet-season ranges. Factors suspected to affect migration include food abundance, surface water availability, predators, and phosphorus content in grasses.

Where do Wildebeest Live?

The Wildebeest is native to eastern and southern Africa. Its range includes Kenya, Tanzania, Botswana, Zambia, Zimbabwe, Mozambique, South Africa, Swaziland and Angola. It is no longer found in Malawi but has been successfully reintroduced into Namibia. Blue wildebeest are mainly found in short grass plains bordering bush-covered acacia Savannah, thriving in areas that are neither too wet nor too dry. They can be found in habitats that vary from overgrazed areas with dense bush to open woodland floodplains.

In East Africa, the blue wildebeest is the most abundant big game species, both in population and biomass. It is a notable feature of the Serengeti National Park in Tanzania, the Maasai Mara National Reserve in Kenya and the Liuwa Plain National Park in Zambia