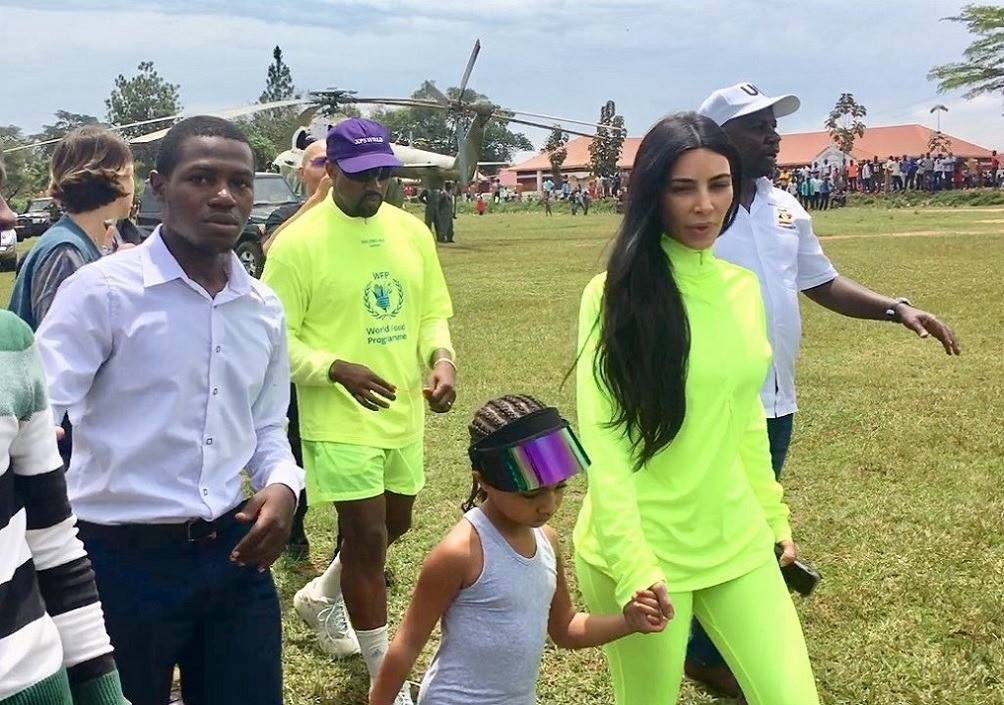 “Uganda is a very beautiful country and we shall be back soon. We shall work with Uganda musicians to promote their music,” said who was accompanied by his wife.

Sources within the lodge revealed that West has marveled at the scenery in Murchison Falls National Park and that “He loves the vibe in Uganda. Wants to show how beautiful Uganda is. Wants to do more for Africa and the world”.

Below are some of the reasons Kubwa Five Safaris thinks why Kanye West has chosen to record his music in Uganda.

If you’re looking for the authentic safari experience, don’t let Murchison Falls’ isolated location put you off. It is a park of wild and rugged beauty that deserves your attention. Murchison Falls also referred to as the Kabalega Falls, is a waterfall that lies between Lake Kyoga and Lake Albert on River Nile.

At the top of the explosive Murchison Falls, the water of the Nile forces its way through a gorge and plunges 7 meters down before flowing west to Lake Albert. Sir Samuel Bar and wife, Florence Baker were the first European explorers to find this explosive waterfall. Sir Baker named this waterfall after Sir Roderick Murchison, president of the Royal Geographical Society by then. The falls is the centerpiece of Murchison Falls National Park.

Basing on its great biodiversity, Uganda is definitely a heaven for birdwatchers. Uganda is a must on any birder’s bucket list, with over 1,000 species of birds with a percentage of 68% of the continent and 12% of the total population in the world, including some of the very rarest, such as the shoebill, the great blue turaco, Shelley’s Crimsonwing, and many more. Indeed, Uganda’s wetlands and Savannah are great habitats for some of the world’s most spectacular birds and wildlife.

Uganda has the highest percentage of Mountain Gorillas in the world: There are currently less than 1000 mountain gorillas left in the world and almost half of the population resides in Bwindi Impenetrable National Park. Gorilla trekking is one of the top activities while on a safari.

Visit Uganda and experience a lifetime memorable activity that you can’t easily forget, and that is why thousands of foreigners flock to the country annually to have trek mountain gorillas. These gentle giants can be found in two of Uganda’s national parks: Mgahinga National Park and Bwindi Impenetrable Forest National Park.

The big five game animals can be found in Murchison Falls National Park in North-western Uganda. A wildlife viewing experience in Uganda is definitely worth the time and money and will leave strong memories in your mind. Uganda is gifted by so many natural and cultural attractions yet undiscovered by many.

Uganda still remains a virgin and most tourists interviewed say that this was their first visit and promised to return with their friends. With an astonishing number of hippos, elephants, and buffalos that are thriving in Uganda’s National Parks, Surely Uganda is well endowed.

Uganda has over 350 species of mammals of all sizes. They range from large mammals like Gorillas, Buffaloes, Lions, and Elephants to small ones, like Bats, moles, and shrews. These mammals can be grouped into three categories: Primates (gorillas, chimpanzees, monkeys, and more), Carnivores (Leopards, African wildcats, Cheetahs, and more), and Herbivores (Buffalos, elephants, Giraffes, and more).

Uganda boasts of numerous Lakes, waterfalls, channels; the water element is prevalent in the Ugandan landscape which even features the source of the mighty Nile. Apart from allowing the lush vegetation to survive, this precious element adds to the beauty of the scenery and spices up your visit to the |Pearl of Africa.

Uganda has got the friendliest people in Africa. The site of a visitor brings a smile to everybody’s face. They will demonstrate this by saying hello to you and calling out Muzungu wherever you pass. This warm aspect about Ugandans can make any kind of visitor feel at home while in Uganda. Every traveler knows that connecting with the local people will guarantee a very great travel experience as they will teach you to give you a broader insight into their culture and way of living.

Although the gorilla trek has to be the main highlight, when it comes to outstanding moments, chimpanzee tracking is some fun that you wouldn’t want to do without in your ultimate Uganda safari. You can find these in Kibaale National Park which has the biggest population on earth and is the best place to observe them.

The chimp trek is a fantastic experience and is quite different from the gorilla trek as it involves being very vigilant and fast to understand where the chimps are and how to find them.

9. Source of the Nile

River Nile is commonly known as the longest river in the world with its source starting right from Jinja – Uganda. The “Nile” word is a Greek word that means valley. River Nile starts from the Northeastern part of Africa and flows from the surrounding areas close to the equator line to the outrageous safari desert and then straight to the eastern Mediterranean Sea. The river is estimated to be about 6600 kilometers long and passes through nine countries but is most centered to Uganda and Egypt. Some of these countries include Sudan, Rwanda, Burundi, Kenya, Tanzania, and Ethiopia.

Jinja is known as East Africa’s adrenaline capital. It is home to the source of the mighty River Nile and is also a bucket list destination for those seeking adrenaline kicks through white-water rafting and kayaking. Jinja offers what are arguably the best rapids in Africa. If water isn’t your thing, you can get your dose of adrenaline by bungee jumping instead. There is also quad biking and horse riding through the villages along the Nile.

Believed to be the second deepest lake in Africa, Lake Bunyonyi lies in the southwestern part of Uganda close the Rwandan border. At approximately 1,962 meters above sea level, this magical lake enjoys moderate temperatures all year round and the lake is usually cool in both the morning and evening hours. Majority of the tourists visit this lake after gorilla trekking in Bwindi Impenetrable Forest. Activities at this lake that has over 29 islands include fishing, canoeing, community walks and so many other activities that will keep the spark of a safari alive throughout your visit.

Lake Bunyonyi, which means “lake of small birds,” is located in southwestern Uganda. It is the second-deepest freshwater lake in Africa and is a stunning view when seen from one of the hills around it. Its beauty is even such that it is printed on one of Uganda’s currency notes. There are 29 islands in the lake, and it’s a heaven for bird lovers.

Kindly book with Kubwa Five Safaris for a thrilling vacation to design your trip.