10 Top Reasons To Visit Hell’s Gate National Park which is situated in the southern part of Kenya just northwest of Nairobi stretching  on an area of 26.35 square miles.

Hell’s Gate National Park is a popular national park in Kenya because of its easy access from Nairobi as well as the variety of wildlife and amazing landscapes that can be experienced with a visit to the park. The park is only 56 miles (90 km) from Nairobi sitting at an elevation of 6,200 feet (1,900 m) above sea level.  Hell’s Gate Gorge is the main attraction and basis for the park’s name.  Red walled cliffs travel along the gorge and feature two volcanic rock formations known as Fischer’s Tower and Central Tower.

Hiking in Hell’s Gate national park is an exhilarating activity ideal for visitors looking for an adventure, this activity offers tourists to explore the scenic landscape of the park.

Hiking is done with the help of local guides who will explain the history and nature of the park to you during the walk, the hike starts from the Ol-Njorwa Gorge and last for about 3 hours. Hiking gives you a chance to see the scenic landscape of the park and a few animals such as zebras, elands, hartebeests, Thomson gazelles, klipspringer antelopes and several bird species such as verreaux’s Eagles, augur buzzard and swifts among others.

Unlike other Kenya national parks, Hell’s Gate national park has a fewer dangerous wild animals which make it an ideal place for hiking and nature walk.

Fischer’s Tower in Hell’s Gate national park is a volcanic plug situated near the northeastern border of the park within a walking distance from Elsa gate; the rock has a height of approximately 25 meters.

According to the Masai folklore, the tower is a Masai girl who turned to a stone after looking back on her home, while on the way to her future husband which is contrary to tradition.

Fischer’s Tower was named after a German explorer Dr. Gustav Fischer who was sent to find a route from Mombasa to Lake Victoria.  The tall rocks stands majestically at the park and is the first natural rock you will encounter, the rock is popular for rock climbing.

Climbing Fischer’s Tower offers you an opportunity to enjoy the scenic surrounding comprising of impressive gorges, lime-streaked cliffs and animals passing by.

Though Hell’s Gate national park is not listed among the best wildlife Kenya safari destinations, the park is a home to a reasonable population of wildlife including zebras, herds of buffalo, hartebeests, elands, Defassa waterbuck, olive baboons, and Masai giraffe among others which you will enjoy watching during a game viewing safari. Hell’s Gate National park is also a home to lions, leopards and cheetah; however they are hard to spot except on a lucky day. 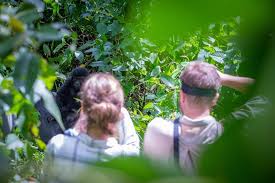 Cycling at Hell’s Gate national park is another amazing experience like no other, cycling past grazing zebras and a giraffe among other animals is a great experience for tourists. The park has no wild cats making it one of the best places in Kenya to enjoy a biking tour in the wild.

For tourists who do not come with their bicycles, can hire them at the Elsa Gate and before you ride the bicycle make sure it is comfortable for you. The best route to do cycling in Hell’s Gate national park is the Gorge road that goes all the way to Ranger’s post. This route has no traffic and it is basically downhill on the way out and uphill on the way back so make sure your legs are ready for the way back as you will need to push through the uphill.

One to avoid attacks from animals like buffaloes needs to have a knowledgeable guide to help show direction away from these animals. The guides can also help you fix your bike issues in case you encounter one during your cycling expedition. 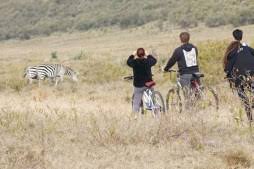 Hells Gate National park is among the beautiful places in Kenya to have a picnic experience; the park has a beautiful picnic site found at the ranger’s post and another one at the bottom of Fischer’s Tower. While on your picnic experience, be care with your packed lunch as there are bold monkeys on the sites that can snatch your meals.

Camping is another interesting thing to do in Hell’s Gate national park; the park has 3 camping sites including Naiburta, Endachata and Ol Dubai. Each of these campsites has toilets, picnic shelters and showers to use.

A visit to the geothermal health spa is a much-needed one and truly relaxing after a strenuous day adventuring in the park. The spa has three cascaded lagoons, the first one serving as receiving pond for hot brine of 90 degrees gathered from the different wells in the geothermal field. The second lagoon is an overflow from the first, designed in an aesthetic manner, and has both shallow and deep ends. It’s a little bit cooler than the first with a temperature of about 50 degrees.

The third lagoon is the largest. It contains warm water and can take up to about 400 people. The lagoon also has an extension of a children’s pool where children as young as 3 years can enjoy the warm bath under the care of lifesavers as their parents relax in other pools.  The health spa offers a bouquet of adventures like bathing for balneological effects, steam, and sauna bathing with a spice of comfort, luxury, and true African hospitality.

The main road through the Park passes the Ol Karia Geothermal Station, a power project which supply’s up to half of Kenya’s energy requirements. The 80 sq km geothermal field is not only one of the hottest sources of natural steam in the world (with an underground water temperature of 304° C) but is also the first African geothermal field to be commercially exploited.

Just beyond the Central Tower (a second, larger volcanic plug) is a track leading down into the fantastic curves of the Ol Njorowa Gorge. An exploration is recommended, but proceeds with care – especially in the wet season when the rocks can become slippery.

Plan your safari vacation with the best tour operators.

In conclusion, hell’s gate national park provides the best epic experience in Kenya and suits a right destination while on safari in Kenya.